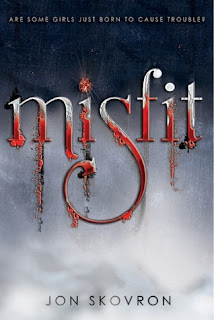 Jael Thompson has never really fit in. She’s changed schools too many times to count. The only family she’s ever known is her father, a bitter ex-priest who never lets her date and insists she attend the strictest Catholic school in Seattle. And her mother—well, she was a five thousand year old demon. That doesn’t exactly help.
But on her sixteenth birthday, her father gives her a present that brings about some unexpected changes. Some of the changes, like strange and wonderful powers and the cute skater boy with a knack for science, are awesome. But others, like the homicidal demon seeking revenge on her family? Not so much.
Steeped in mythology, this is an epic tale of a heroine who balances old world with new, science with magic, and the terrifying depths of the underworld with the ordinary halls of high school. -- Goodreads

My Thoughts:
I'd heard a bit about Misfit from a few other bloggers before I can across the galley on NetGalley (if you don't know about NetGalley, check it out), but I haven't read much paranormal in the past few weeks and the whole demons and mythology aspect sounded really interesting.

Misfit wasn't what I was expecting and I'm having a difficult time deciding if I liked it or not. The story and the characters were interesting and exciting, but the writing style was really difficult for me. The point of view and tense changed throughout the novel, which confused me and drove me crazy. I probably would have stopped reading after about three chapters if I weren't so interested in the mythology setup in the novel.

So the story and mythology of the book, pretty awesome. The whole world of demons and myth came together really nicely and was clearly well researched. I was impressed by how well the religious stories and the myths came together and created a very complete history and background for the demon world. It wasn't like anything else I've read (although I haven't read very demon/religious/mythology centered books). There's a lot going on; many cultural and religious stories are mixed.

I liked the characters, but some of them were a bit over-the-top for me. I liked Jael for the most part; her character growth was excellent and I liked her relationship with boy. Jael's father and some of the other religious figure characters just didn't seem believable to me. They were too much; I don't know very many priests, but I can't picture these guys in a church in the real world.

If you can get passed the strange writing style, the story's pretty good.


Rating:
I'm giving two ratings because the story was:

but the writing style was: