The Search for WondLa 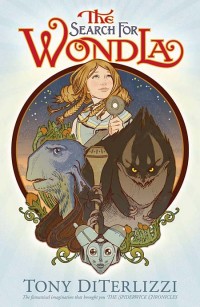 Eva Nine is a curious and sensitive twelve-year-old who has existed only in a subterranean home called Sanctuary, cared for by a robot named Muthr. Eva's great desire is to go aboveground, and her wish comes true, though not as she had imagined. On the surface, Eva goes in search of other humans--she has never met one--and soon meets both friend and foe.-- From Goodreads

I loved everything about this book. Tony's an amazing author and illustrator and really knows how to create a fantastical tale that will really speak to middle grade readers (and reluctant readers). The characters are fun and interesting and Eva Nine is so adventurous that both boys and girls will like her and relate to her.

The book was funny, exciting, and fast-paced -- all of which worked together perfectly to make this an awesome adventure story about figuring out who you are and your place in the world.

The layout and design of the book is amazing. The whole book is filled with little illustrations in shades of green and each chapter opens with a full two page spread illustration. It's just a really gorgeous book, that although pretty long will easily entice middle grade readers to pick it up. The website is pretty awesome to; check it out here. 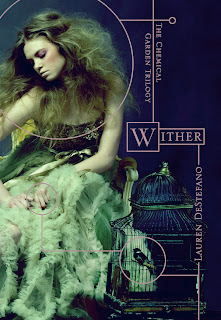 What if you knew exactly when you would die?

When sixteen-year-old Rhine Ellery is taken by the Gatherers to become a bride, she enters a world of wealth and privilege. Despite her husband Linden's genuine love for her, and a tenuous trust among her sister wives, Rhine has one purpose: to escape—to find her twin brother and go home.

But Rhine has more to contend with than losing her freedom. Linden's eccentric father is bent on finding an antidote to the genetic virus that is getting closer to taking his son, even if it means collecting corpses in order to test his experiments. With the help of Gabriel, a servant Rhine is growing dangerously attracted to, Rhine attempts to break free, in the limited time she has left. -- Goodreads

My Thoughts:
I was incredibly excited about Wither; I love dystopias and this one just sounded amazing. It was completely amazing and I can't wait to read the rest of the trilogy and see what will happen to Rhine next.

The writing is amazing; Lauren can really craft a story. The book grabbed me right from the beginning and kept me interested the whole way through. The characters, the plot, the world were all interesting and well crafted. It's so important for the worlds in futuristic dystopias to be understandable and well-developed. Lauren did a wonderful job of introducing the world and the conditions of this futuristic society throughout the book without adding long descriptions of the world or confusing the reader by not adding enough backstory.

The characters -- good and bad -- are all complex. I really liked Rhine because even in her horrible circumstances she held on to who she is and did whatever she could to be herself. I even felt for Linden (he may appear to be the bad guy, but it's not that simple) and him to have something more than the life his father has forced him into.

Wither is one of the best dystopias I've read in a while; I loved everything about it.

I've already talked about how much I love this cover, but I have to say it again: it is so beautiful.
Posted by sarah s at 1:23 PM 1 comments

I am posting to today to ask you, my wonderful readers, fellow publishing professionals, and book bloggers to ask you for help. As some of you know I am a graduate student at Portland State University studying Publishing and working in the Digital Content Department of the student-run publishing house Ooligan Press. Due to recent budget problems in the state university system, this amazing and unique program and press are on the chopping block. For various reasons including scarcity of English department resources and other bureaucratic squabbling, the publishing program is at risk of being compromised, if not cut entirely.

The students in the publishing program have started to organize a letter writing campaign to let the higher-ups and media know how valuable this program really is. I really hope that we can rise above the land-grabbing and internal competition for resources in order to find solutions that both save money and better serve the students of the entire English Department at PSU. We must ensure more equal distribution of resources in the department to prevent further erosion of the Ooligan publishing program.

There are currently 120 publishing students enrolled in the program – not only will Portland's vibrant literary community shrink if this program is cut, but publishers will have a smaller pool to pull qualified interns and employees from. Two recent articles in Publishers Weekly and Poets & Writers have also highlighted how unique and valuable our program is.

On a more personal note, I am preparing to graduate this spring and being in the Publishing Program and a part of Ooligan Press has been one of the most wonderful experiences of my life. It has been a great privilege to work with fellow students and faculty at Ooligan Press for the past two years. I know I am leaving with a degree that has absolutely prepared me to be successful in whatever path I choose.

I hope that you will want to help save this valuable program too. If you are interested in joining our letter writing campaign or finding out more about the Master’s in Publishing or Ooligan Press please email me at sarah.schmalzer@ooliganpress.pdx.edu for more information.

Thank you in advance for your efforts.
Posted by sarah s at 7:02 PM 0 comments