Please welcome Sybil Nelson, author of a newly released middle grade novel, Priscilla the Great. Sybil has graciously offered to do a guest post about her publishing experience. Since I'm studying publishing and hoping to work in the publishing industry I am especially interested in authors' experiences getting published and working with publishers. I also feel it is incredibly important that we readers think about the time and effort authors put into getting published and often what a difficult road it is to publication.

My Rocky Road to Publication
When I said I would write this blog post, I had no idea how much I would dread actually writing it! Let’s just say my road to publication has not been a smooth one and it’s a little depressing to rehash it all.  I wish I could say that with an elegant sigh I typed the last period of my masterpiece then sent it off to numerous agents and received even more numerous offers. Ha! Not even close. But hey, what’s that saying? Whatever doesn’t kill you makes you bitter…I mean stronger. Something like that.
So let’s start with a rough timeline of my career.

2002
I was a math teacher who loved to read and got sick of there never being any black characters in books. I knew for some books it wasn’t possible, but for modern day books, everyone knows at least one black person right? Why are they always ignored in books? Especially black women. So I jotted down some poorly crafted chapters of a book about a black ballerina married to a white basketball player and their spoiled rotten children. That story didn’t really go very far and I gave up writing for a while.

2004/5
I spit out a creepy and disturbing short story about an interracial couple living in 1970’s Virginia. I liked the story so much that I expanded it into a full length novel then started submitting to agents. Mistake number 1. I submitted way too early. The book was not ready for professional eyes. Fortunately, I kept writing while blindly sending query letters to agents and I wrote my second book The B Word of Bridgeton about a black ballerina who falls in love with a white basketball player. Sound familiar? It was basically the story I wrote earlier except it took place when they were in high school and focused on how they met.
Around this same time, I discovered www.thenextbigwriter.com, a wonderful review site that whipped my story into shape. This time when I submitted to agents, I felt it was the best story it could be. Yet in still, it took me two years to actually get an offer of representation from Uwe Stender of TriadaUS agency.

2007
I got myself a real bonafide agent and I mistakenly thought that any day I would be picked up by a publisher, right? Wrong. That’s when the real work began. My agent sent me through months of revisions before he started sending to publishers. And then once he did start submitting, that’s when the rejections started flooding in.
Fortunately, during this time, I kept writing. I wrote during every free moment. Which weren’t many considering I had kids and a full time job and a husband and grad school.  But I still managed to write three other books during this time.

November of 2008
The B Word comes under serious consideration by a big publisher. They send me through one major revision, and then another, and then another, and…I’m still waiting for their final decision. Yes, they’ve had this book since November of 2008 and I have still not received a yes or a no. Every time my agent inquires, they say they need more time. Many people say, well that’s just too much time why don’t you take it to another publisher? And they fail to realize that it was rejected by every other publisher. The people that have the book now are huge! And I am going to give them all the time they need if it means that they will perhaps offer me a contract. 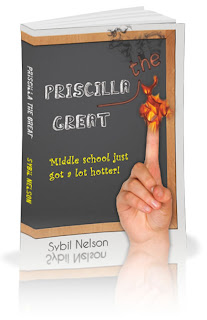 2009
Okay, so during this two year stalemate with that big time publisher who will remain nameless, I also wrote Priscilla the Great.  Writing this book was so easy and I would say magical except that sounds really corny. But in a way it was. I wrote it in less than a month. Priscilla’s voice just poured out of me. In a matter of weeks after the first draft was completed, this book caught the attention of another major publisher who shall remain nameless. They sent me through one revision, and then another and then another. Eight months later, they passed.
One thing that happened during this year that managed to boost my confidence a little was that my agent sold the movie rights to Priscilla. Since then I’ve even had dinner with the scriptwriter. Very exciting indeed.

2010
During this time, of course I continued to write, but I was also getting really frustrated with the whole publishing process. I had written nine books over the course of four years and I had nothing to show for it. So, I decided to self publish. I was just about to release my book The Guardian of Eden as a self published title when I decided to give a small publisher a chance. I submitted to Solstice Publishing and was accepted. The book title was changed to Secrets of Eden and was published as an ebook in August of 2010.
I also self published my book about the interracial couple in Virginia called Ain’t No Sunshine and as of this writing, it’s actually ranked higher than Secrets of Eden on the Amazon rankings!
Anyway, I started feeling better about the publishing industry. But I still wanted those big time houses for The B Word and Priscilla. But then, in August of 2010, Priscilla the Great won The Strongest Start Novel competition over at the Next Big Writer. It came with a $2500 self publishing package with CreateSpace. I felt like that was the motivation I needed to just go ahead and publish the book myself.  I mean, it had been through the rounds of all the big and midsized publishing houses and no one wanted it. Once again, I started the self publishing process and I was just about complete, when I decided to give the publishing industry one more shot. I contacted WorldMaker Media and they offered me a contract! Together, we worked our butts off and made my original release date of December 15, 2010.
So there you have it. My rocky road to publication. And it’s not over yet. I still have seven other books that I want to see published and ideas for many more. I’m hoping that Priscilla the Great will be wildly successful and that all those companies that rejected me will regret. I’m realistic though. I know that’s not likely to happen. I just hope that I sell enough books that I will be able to open more doors for my future publishing efforts.

Thank you Sybil and congratulations!
Posted by sarah s at 9:00 AM