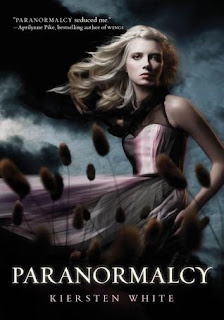 I already talked a bit about my initial excitement in an earlier post here, but I will briefly reiterate that I was/am excited about this particular paranormal novel because of the strong female lead character.


Weird as it is working for the International Paranormal Containment Agency, Evie's always thought of herself as normal. Sure, her best friend is a mermaid, her ex-boyfriend is a faerie, she’s falling for a shape-shifter, and she’s the only person who can see through paranormals' glamours, but still. Normal.

Only now paranormals are dying, and Evie's dreams are filled with haunting voices and mysterious prophecies. She soon realizes that there may be a link between her abilities and the sudden rash of deaths. Not only that, but she may very well be at the center of a dark faerie prophecy promising destruction to all paranormal creatures. From Goodreads site

Let's just start with characters: Evie is awesome. Although she works for a secret government agency chasing down paranormals, she is still just like any other teen girl -- she worries about boys, loves to shop, feels out of place, struggles to figure out who she is and what she wants. And through everything she's pretty clever and runs around with a pink sparkly taser. Kiersten White proves that you can be girlie and love pink and still be a strong, smart, independent girl. As for the rest of the characters, they are all interesting and play their rolls in the overall story well. Lend, the romantic interest is an interesting opposite of Evie in many ways adding to her character as well as his. I love these sort of character dynamics.

This novel has more going on than you would expect after reading the summary, even after reading the first 100 pages. It's more than just a girl hunting down a killer of paranormals, or a girl falling for a paranormal, or a girl struggling to figure out who she is -- it's all of those things plus several twists and turns. I honestly had trouble stopping myself from pulling it out at dinner with friends when the conversation began to bore me because all I could think about was what was happening to Evie!

Just have to make a few comments on the cover. It  is one of best I've seen in while. The whole mood created fits the book perfectly and it's mysterious, dark, and pretty all at the same time (just like the main character). Everything about it just works; can't wait to see the covers on the next books in the series.

White has created an excellent YA paranormal novel that keeps all the elements teens (and adults) love about the genre while adding something new and different, especially through her excellent characters.

Move to the top of your to-read pile
Posted by sarah s at 3:53 PM