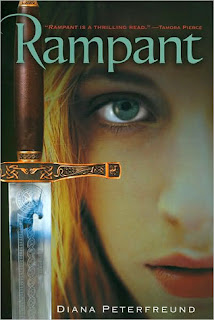 Forget everything you ever knew about unicorns...
Real unicorns are venomous, man-eating monsters with huge fangs and razor-sharp horns. Fortunately, they've been extinct for a hundred and fifty years.
Or not.
Astrid had always scoffed at her eccentric mother's stories about killer unicorns. But when one of the monsters attacks her boyfriend—thereby ruining any chance of him taking her to the prom—Astrid finds herself headed to Rome to train as a unicorn hunter at the ancient cloisters the hunters have used for centuries.
However, at the cloisters all is not what it seems. Outside, the unicorns wait to attack. And within, Astrid faces other, unexpected threats: from the crumbling, bone-covered walls that vibrate with a terrible power to the hidden agendas of her fellow hunters to—perhaps most dangerously of all—her growing attraction to a handsome art student ... an attraction that could jeopardize everything. -- Goodreads

My Thoughts:
I don't think I've ever read a Unicorn book, probably not even when I was little. I just couldn't see the appeal of unicorns, so when I first heard about Rampant, I didn't really think it would be something I'd be into. But after reading some really good reviews and learning that the book was actually about killer unicorns, I decided I had  to read it.

The book was amazing and Diana is an amazing writer. The storyline alone made the book amazing and original. I don't think I'd heard of any killer unicorn books before this two-book series. The whole backstory is rich and fascinating, and so well thought out and written. Rampant was definitely a fresh take on the YA paranormal craze.

I think what really made the story for me was the unicorn fighters (especially Astrid and Cory). They are each strong, smart young women, but they still struggle to figure out their place and if they truly want to live the life of a unicorn fighter. Plus Astrid shows that you can be this strong warrior woman and still have a boyfriend. I think she's an awesome role model for young girls.

I don't want to say too much about the plot because I'm worried that I'd give something important away. But I do want to say that I loved that everything all came together and played out in the end. I'm looking forward to Book 2: Ascendant.
Posted by sarah s at 6:21 PM