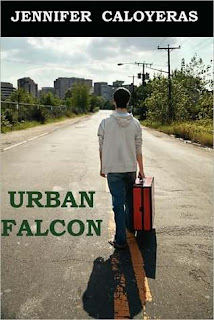 I've been trying to read more contemporary fiction. I loved contemporary, realistic fiction when I was a teen, but now as an adult I haven't been reading it as much. Urban Falcon was a good realistic fiction novel that wasn't too heavy on the "my life is depressing" feeling that a few too many realistic novels have.

I had a little trouble getting into the novel and relating to Evan, but after a few chapters the pace picked up and I began to connect with Evan. He struggles with things most teenagers do; there was nothing over-the-top, just a boy trying to deal with being a teenager and figure out who he is and what he wants. It was refreshing to read a realistic boy coming-of-age story. I've found several excellent girl coming-of-age stories, but not a lot for boys. There's always something missing, but not here.

I especially enjoyed the ending. Everything was tied up well enough for me to feel satisfied at the end, but Evan's life isn't all tied up and perfect. He's still trying to figure everything out and I really like books that end in a way that is true to life. Things don't suddenly all work perfectly in most people's lives.

Check back later today for a guest post/interview with Jennifer.