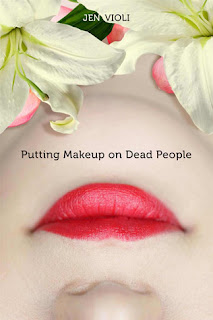 
In the spring of her senior year, Donna Parisi finds new life in an unexpected place: a coffin.
Since her father’s death four years ago, Donna has gone through the motions of living: her friendships are empty, she’s clueless about what to do after high school graduation, and her grief keeps her isolated, cut off even from the one parent she has left. That is until she’s standing in front of the dead body of a classmate at Brighton Brothers’ Funeral Home. At that moment, Donna realizes what might just give her life purpose is comforting others in death. That maybe who she really wants to be is a mortician.
This discovery sets in motion a life Donna never imagined was possible. She befriends a charismatic new student, Liz, notices a boy, Charlie, and realizes that maybe he's been noticing her, too, and finds herself trying things she hadn’t dreamed of trying before. By taking risks, Donna comes into her own, diving into her mortuary studies with a passion and skill she didn’t know she had in her. And she finally understands that moving forward doesn’t mean forgetting someone you love.
Jen Violi’s heartfelt and funny debut novel is a story of transformation—how one girl learns to grieve and say goodbye, turn loss into a gift, and let herself be exceptional...at loving, applying lipstick to corpses, and finding life in the wake of death. -- Goodreads

My Thoughts:
The cover and title of this book really drew me in; I needed to know what it was all about. I was really hoping that the book would be awesome, but I hadn't heard much about it so I didn't have super high expectations. Putting Makeup on Dead People was amazing; I devoured it in two days.

I really connected with Donna. She's having a really hard time getting over her father's death and has basically stopped living her own life. Although I haven't experienced the death of parent, I still felt connected to her because her struggle is more with moving on after tragedy and being who you really want to be. She deals directly with her father's death, but that's not the only thing going on. She has to figure out what she wants to do after high school, how to deal with mother, and navigate through the world of dating. Donna is really lost at the beginning of the novel and slowly figures out how to move on and be who she was meant to be. This isn't an easy task and I felt the Violi created a very realistic coming-of-age story. Not everything works out perfectly for Donna and she has to make some difficult decisions, just like we all have to in our lives.

Beyond really connecting with Donna, I really liked her relationship with the Brighton Brothers who run the funeral home. They were wise, helpful mentors who steered Donna in the correct direction, but gave her freedom to figure things out in her own way. They were exactly what I'd want in a mentor.

The whole Parisi family dynamic also felt realistic to me. Donna struggles to create a meaningful relationship with her mother, feels alienated from her siblings, and fights against old family dynamics and discord. her family wasn't all good or all bad (or just missing like in many YA novels); they're a bit of both and just trying to live their lives and help Donna return to living her's.

The whole story is really wonderful, but the characters are what really made the story so good.