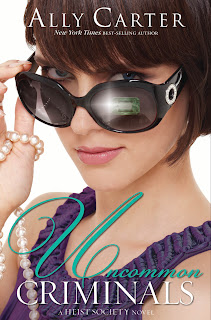 Katarina Bishop has worn a lot of labels in her short life: Friend. Niece. Daughter. Thief. But for the last two months she’s simply been known as the girl who ran the crew that robbed the greatest museum in the world. That’s why Kat isn’t surprised when she’s asked to steal the infamous Cleopatra Emerald so it can be returned to its rightful owners.
There are only three problems. First, the gem hasn’t been seen in public in thirty years. Second, since the fall of the Egyptian empire and the suicide of Cleopatra, no one who holds the emerald keeps it for long — and in Kat’s world, history almost always repeats itself. But it’s the third problem that makes Kat’s crew the most nervous, and that is . . . the emerald is cursed.
Kat might be in way over her head, but she’s not going down without a fight. After all, she has her best friend — the gorgeous Hale — and the rest of her crew with her as they chase the Cleopatra around the globe, dodging curses and realizing that the same tricks and cons her family has used for centuries are useless this time.
Which means, this time, Katarina Bishop is making up her own rules. -- Goodreads

My Thoughts:
I assumed (wrongfully) that this sequel to Heist Society would be similar to the first, in that Kat and her teenage gang of thieves would be stealing the emerald and having a few issues along the way -- basically the same general plot line of the first book just with a different item. But Uncommon Criminals was completely different, and I think I liked it better than Heist Society.

Just as with the first book, I loved Kat and her friends, especially Hale and Nick. Their characters all continued to grow and be interesting. I especially enjoyed the Kat and Hale love interest angle (which is introduced in the first book, but is nicely expanded upon in the second book). Their possibly budding relationship felt very true to life to me; Kat is struggling to figure out who she is and what she wants and Hale is simply complicating that. She really struggles to figure out what she wants and if what she wants is Hale.

Beyond characters, I loved the plot twists. The whole book is full of little twists and changes, which really kept it exciting and different from the first installment. I loved that it wasn't just a heist story -- Kat does steal things and her gang comes up with crazy plots and schemes to get the emerald, but the core of the story is about Kat struggling with being a thief and what that means to her.

Don't know when the next installment will be released, but I'm looking forward to more adventures with Kat and her gang.