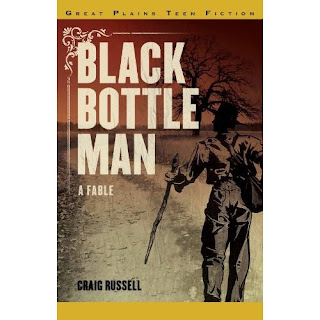 If you read my IMM (2), you know that Craig Russell contacted me about his book, Black Bottle Man. The concept is like nothing else I've read. There are a lot teen books out now featuring fallen angels and other religious elements, but none quite like this one. So I was quite intrigued by this new and unique voice.

Forced to move every twelve days, what would happen to your life?


It’s 1927. Rembrandt is the only child in the tiny community of Three Farms and his two aunts grow desperate for babies of their own. Hope and Hell arrive in a mysterious black bottle, and on a moonless night a dark spell is cast. Soon after, a man wearing black top-coat, and a ‘glad-ta-meet-ya’ smile comes to visit. The devil seeks payment, and a dangerous wager is made. Until they can defeat him, Rembrandt, Pa, and Uncle Thompson must embark on the journey of their lives, for if they stay in one place for more than twelve days terrible things happen. But where and when will they find a champion capable of defeating the Black Bottle Man?
Time ticks.
Lives change.
Every twelve days. From Great Plains Publications' website

The story is told mainly through Rembrandt's eyes, but we do get a few chapters from other characters' points of view. The shifting viewpoints could get confusing, but the characters' voices are so different that it isn't an issue and everything comes together in the end in a way that simply wouldn't be possible without the varying viewpoints.

Besides varying viewpoints, the novel is not told in linear time. It jumps from present day (2007) back to the 1920s and 30s. This is structure is what really got me into the novel. We see Rembrandt as an old man from the beginning and we slowly learn how he ended up as this person. The changes in time and in turn plot, help move the story along rapidly. I must say the beginning was a bit slow for me, but it picked up and I read the last 70-80 pages in one sitting.

The story itself is strange and unique: two brothers and a boy set out to find someone who can fight the devil to save their souls and the boy's two aunts. It isn't all strange other worldly demons and whatnot, like you might expect, it's very realistic. The men travel from place to place during the Great Depression and learn "hobo signs" which give them magical powers. But the signs are the only totally other worldly element -- the story and its characters are firmly rooted in reality, which so unexpected for a story like this.

My only issue with the whole thing is that I'm not sure if it's really a "teen" book, but then again what really makes a "teen" book a "teen" book. I think the book would appeal to older teens, not just because part of the story is told from the point of view of an older man, but because the action's a bit slow in the beginning and there's a lot to take in story wise.