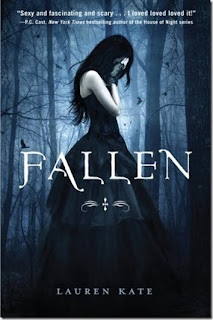 I've been wanting to read this one since it came out, but just hadn't gotten to it yet. So I was really excited when I won a copy of the new paperback edition in a Random House Twitter contest. I'd only read one fallen angels book (Hush, Hush by Becca Fitzpatrick) before Fallen and wanted more.

Mysterious and aloof, he captures Luce Price’s attention from the moment she sees him on her first day at the Sword & Cross boarding school in sultry Savannah, Georgia. He’s the one bright spot in a place where cell phones are forbidden, the other students are all screw-ups, and security cameras watch every move.

Even though Daniel wants nothing to do with Luce–and goes out of his way to make that very clear–she can’t let it go. Drawn to him like a moth to a flame, she has to find out what Daniel is so desperate to keep secret . . . even if it kills her. -- From Goodreads


Let's start with the characters. Every character is interesting and has more going on then meets the surface. I loved Luce right from the beginning; she's lost and struggling to figure out what's happening to her and who she really is. Although she's caught between two boys and is rather obsessed with them, Fallen isn't just another paranormal romance where the girl simply cannot live without her love interest.

Lauren Kate's writing style really makes the book. Her voice is interesting, smart, and different. I can't wait to read Torment and whatever comes next for Kate and Luce.

I have to say a bit about this cover -- it's just gorgeous (and so it the Torment cover). It's dark and mysterious and absolutely fits the content and feel of the book. The image, the blue and black, and the font -- it all just works so well.