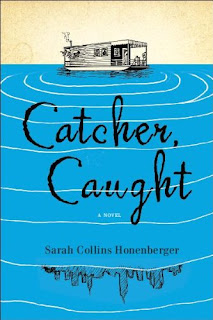 I am not much of a fan of Catcher in the Rye, but Sarah Collins Honenberger's book sounded like a lot more than just a book about a boy who relates to Holden and uses him to find courage. Beyond that, I was also especially interested in the alternative medicine side of the book.


Catcher, Caught tells the story of Daniel Solstice Landon, a 15-year-old high school student diagnosed with leukemia, as he struggles to find his place in the world while staring down his own mortality in the wake of a recent leukemia diagnosis. A reading of Catcher in the Rye, causes Daniel to question the intentions and authority of those around him. Tired of his cramped surroundings and hippie parents’ alternative approaches to his treatment, he follows the footsteps of Holden Caulfield to New York City in search of the same eternal truths, only to discover the importance of home when death looms. -- From Catcher, Caught promotional material

First off, I have to say I really loved Daniel's voice and the way the story is told. The novel is set up like Catcher in the Rye, in that Daniel is going to simply tell you his story, his side of things. And it works wonderfully; Daniel is interesting and thoughtful and a great storyteller. His story is about far more than just his struggle with leukemia. He struggles with being a teenage boy, falling in love, fighting with his parents, trying to figure out who he really is and what he wants.

The story unfolds very naturally -- the novel's all just moments in Daniel's life. There are difficult, serious moments as he struggles with his illness, funny moments with his friends, sweet moments with his girlfriend (and some very real and well written love scenes, I must say), and exciting moments as Daniel tries to break away from what's expected of him.

I found the alternative medicine and minors having a say in their treatment choices plot very interesting and very well written for such a serious and controversial subject. Since Daniel is just stuck in the middle with his parents and the Social Services fighting over what is best for him, you get a less biased view of both sides. Daniel just wants a say in what happens to him, so there's no judging tone about conventional or alternative medicine, which I really enjoyed.

Overall Catcher, Caught is a thoughtful, well written coming-of-age novel about a boy who's fighting cancer.