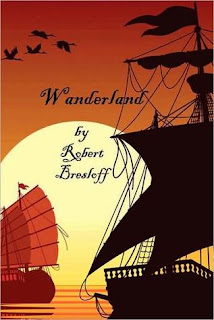 When the army of the new emperor of the Ming Dynasty, Zhu Di had invaded neighboring Annam, Chen, a thirteen year old boy was saved by a mysterious old man as the invading Chinese destroyed his village and killed his family. The old man turned out to be, Master Waan, a Ship's Wizard in the service of the great Chinese admiral Zheng He. Master Waan was on his way to meet the admiral's fleet that was to set sail upon his arrival. Though Chen thought the old man odd, he knew that his only chance for survival-to accompany Master Waan to China. As the wizard's apprentice, Chen sailed with the fleet, a gigantic armada made up of great Chinese Treasure Ships in search of what Chen believed to be magical place referred to only as Wanderland. He soon learned that it was no coincidence Master Waan had appeared at the village just in time to save his life. It was Chen's destiny to find Wanderland. -- Goodreads

My Thoughts:
I don't know why I don't read more historical fiction; I always end up loving every historical YA I read. And Wanderland was no exception.

This is the perfect young boy adventure story. There are pirates, wizards, battles on the high seas, and treasure hunts. The novel was fast-paced, action-packed, and fun. Chen's adventures are exciting, but not so far-fetched that they are unbelievable. My pirate-loving nephew would totally be in to this story. Robert created the right mix of self-discovery and adventure for young boys. Chen is an excellent role model as well. He isn't perfect and struggles to find his place, but in the end he figures out who he is and is able to save the day.

Overall it was a fun read that I think would be a perfect book for young reluctant reader boys.

Check back later today for an interview with Robert Bresloff.
Posted by sarah s at 10:00 AM